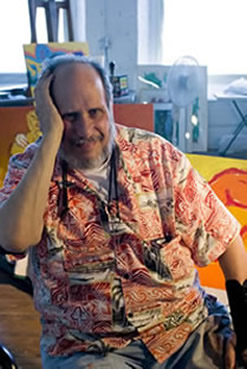 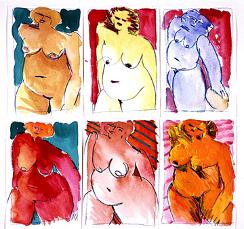 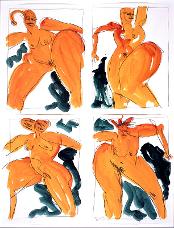 John speaks about his work:

I drew my first nude as a 16-year-old high schooler in New York City in 1959. A classmate took a small group of us to open life drawing at the famous Art Students League in Manhattan. There, for less than a dollar, we drew the figure for two hours with a few dozen other artists.

I had never seen a live nude model before, but after a minute or so of trepidation, I began to draw. And immediately I was hooked. There was something about the abstract beauty of the figure — plus the model's inherent humanness, sensuality and personality — that I wanted to capture.

In time, I saw the figure as a template for experiments in color, expression, abstraction and playfulness. That's where I am now, using the figure to explore a wide visual vocabulary. People have called me an abstract painter, an expressionist, a fauve, a colorist and Matisse-like. Who knows?

Some of the artists where I have my studio, in Western Avenue Studios in Lowell, Mass., wonder why I use different models. “All his models look alike,” they say. But I need models. They are my collaborators, whose style and personalities influence my paintings as much as their torsos, limbs and faces.

Schooling: Graduated from the High School of Art and Design, New York N.Y., 1959; majored in advertising art. Graduated from Syracuse University, 1963: bachelor of arts; Majored in American studies and journalism.

Journalist: For 40 years, newspaper and magazine writer, editor and executive.  I worked for a variety of general interest and specialized publications with local and national and national audiences. Currently write a weekly column, "After the Show," about movies, TV, culture and society for the Waterbury Republican-American in Connecticut.

Exhibited in one-person and group shows at the Whistler House Museum of Art, Lowell, Mass., November and December 2002, January 2004, April 2006.

Exhibited in a three-person exhibition at the Higher Ground Coffee House and in one-person show at La Boniche Restaurant, Lowell, Mass., April and May 2003.

Exhibited at the Art's League of Lowell Gallery, September and December 2005.

Exhibited in " In Sequence," an exhibition curated by Patrick Pollard, The Brush Art Gallery and Studios, Lowell, Mass., February-May 2006.